Walkmans have come a long way and if you’re a 90s kid, you pretty much know what I’m talking about. Now evolved into a mobile device, Sony has continued to keep the Walkman brand intact and has been incorporated into their mobile devices with audio being one of the main features. Now we have the new Xperia E1 which is a succesor to the Xperia E with beefier specs, bigger screen, new look and of course, with the Walkman touch. It also comes in a dual-sim variant so this will be appealing. 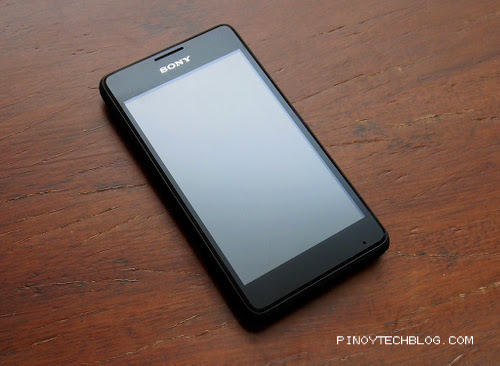 Looking at the Xperia E1, it seems to have the form factor of the flagship Xperia Z1 although, non-metallic due to the pla stic materials. It’s really light too at 120grams, but the phone doesn’t feel too cheap at all. Even with the cheaper materials, the phone doesn’t fell short on how it was engineered with the cuts and corners of the phone being precisely well done. This is what I like with Xperia phones as they still maintain build quality standards even to non-flagship models. Sadly, this is not a waterproof phone as most of the Xperias are. Don’t even think of dropping this either. 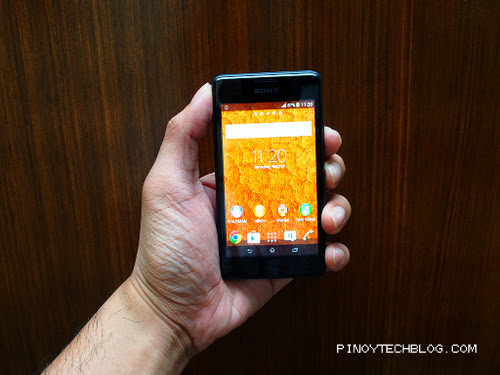 The screen size is 4.0 inches which fits the hand nicely and is perfect for one-handed use. 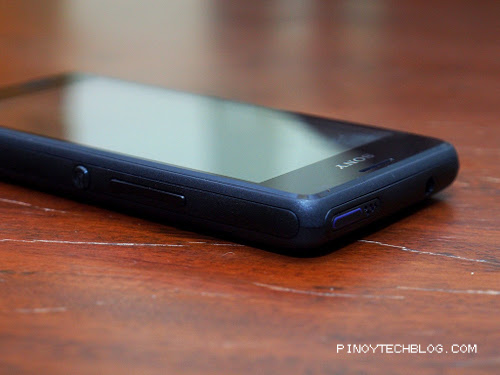 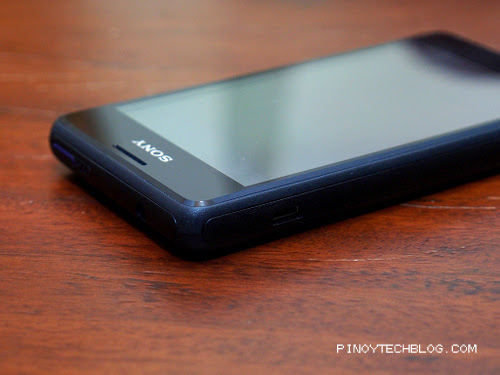 At the top we have the dedicated Walkman button (not to be mistaken as a power button) with the 3.5mm audio port.

At the right, there’s the volume rocker and the power button.

At the left is where you’ll find the micro-USB port for charging or syncing to your computer.

Looking at the back, we have the 3.15 MP camera and the large speaker grills below. 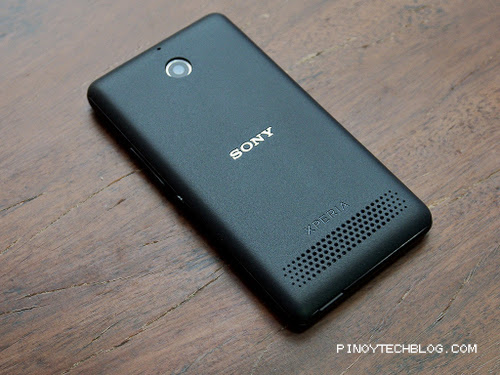 The Xperia E1 has a Dual Core 1.2 Ghz processor and 512 MB RAM. Not quite fast by today’s standards but enough for a mid ranger of its class. Let’s have a look at the benchmarks. 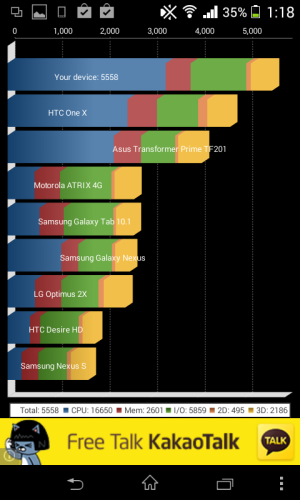 According to the Quadrant benchmark, it ranks higher than the HTC One X. 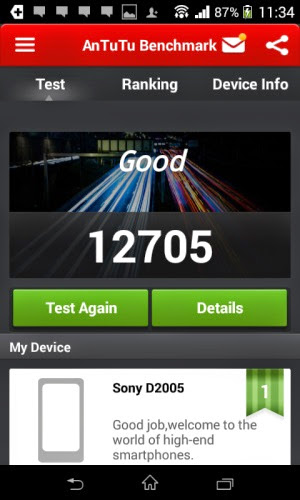 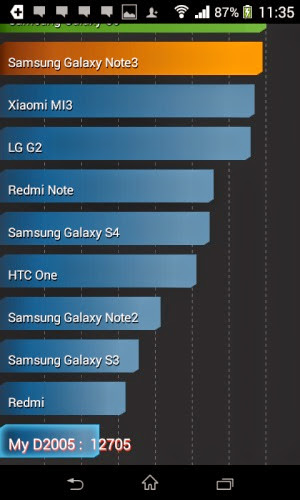 Antutu benchmark ranks the Xperia E1 below the Samsung Galaxy S3 (of course) with the Redmi phone being next to it.

Overall performance seems to be okay. It’s good enough to run some basic apps like Facebook or Instagram and maybe some light games. But there are times when I encounter some lags when opening apps or just panning through a web page so I would expect the phone to start getting sluggish right away when you start to load it with apps. Not to mention those apps that run on the background so you’ll need to be very picky. It comes installed with with the latest Jelly Bean OS which is 4.3 and is also planned to be updated to Android KitKat (4.4) so I hope that the performance would improve after that.

The display makes use of a 480×800 pixel resolution with a ~233 ppi pixel density. It’s a common resolution and pixel density trait for 4-inchers but I find the colors looking a bit vibrant and the objects seemingly sharp enough. It’s also good for watching videos which gives a bit of justice to your HD movies and runs them smoothly too. 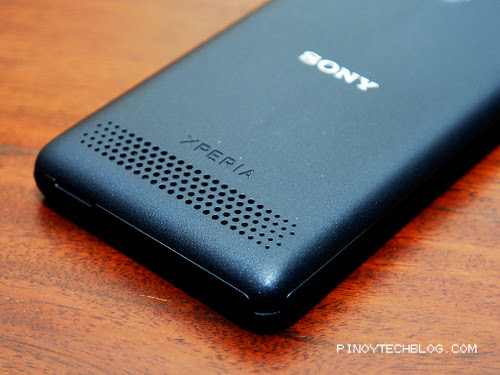 Trying out the sounds of the Xperia E1, it can be quite louder than most phones thanks to the large speaker grills at the back. It can fill up a room easily and even when tested outdoors, it can still be heard clearly with a group sitted along a coffee table. Although, you need to keep the phone faced down since it gets muffled when lying on its back. For the sound quality, it’s good enough to please the discerning audiophile. There’s also a built-in 5-band equalizer although there are better app alternatives out there. The Walkman music player also comes with the ClearAudio+ feature that automatically determines the best audio quality depending on the song as well as a Surround sound mode. This would seem to be intended for those who love audio but the 4GB internal storage may put off some people so better stick a large micro-SD card (max 32GB). 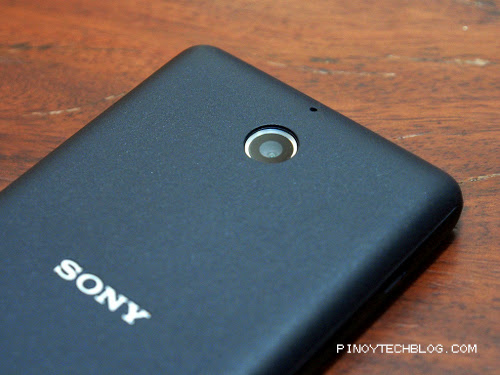 The phone uses a lone camera which is 3.15MP without LED flash. It can also produce WVGA videos at 30fps. Let’s have a look at the samples below.

Image quality isn’t quite good especially for those who are keen on colors and sharpness but it still does its job in capturing good still photos especially in broad daylight. At night though, it will be quite a challenge due to the absence of flash. 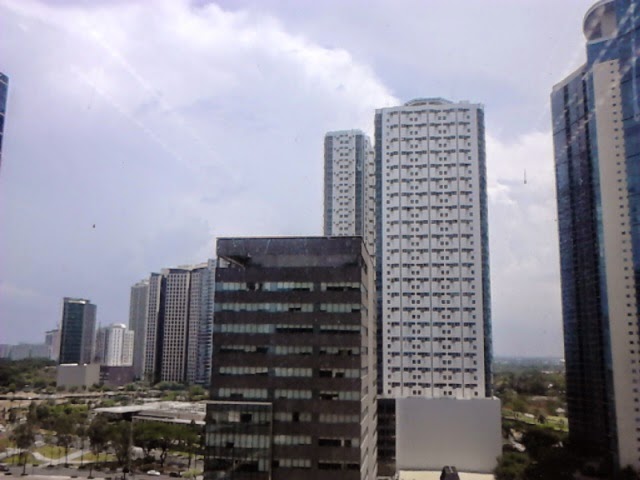 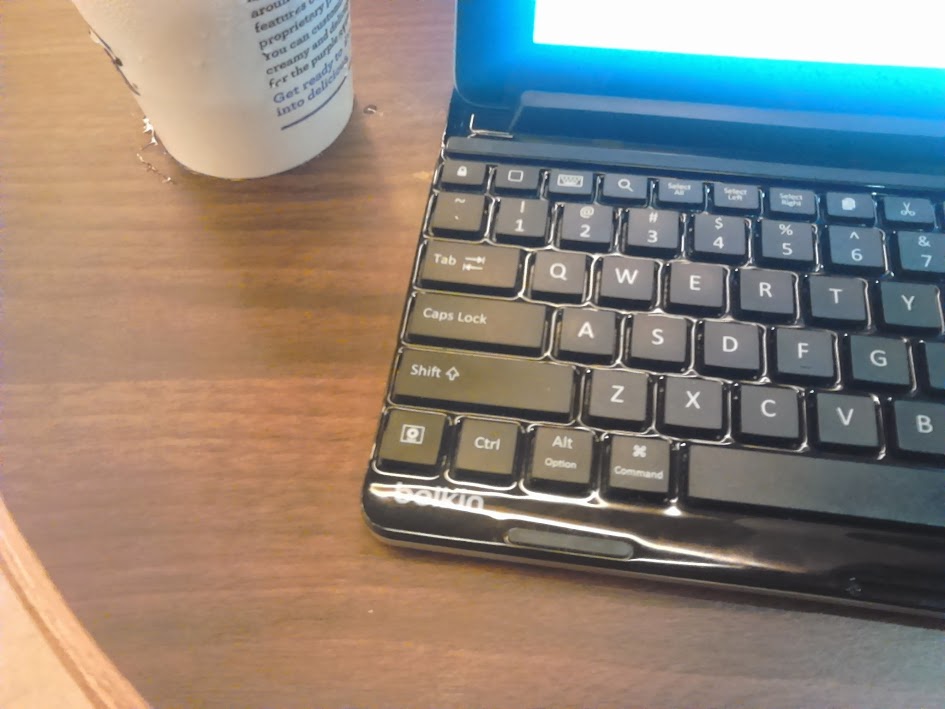 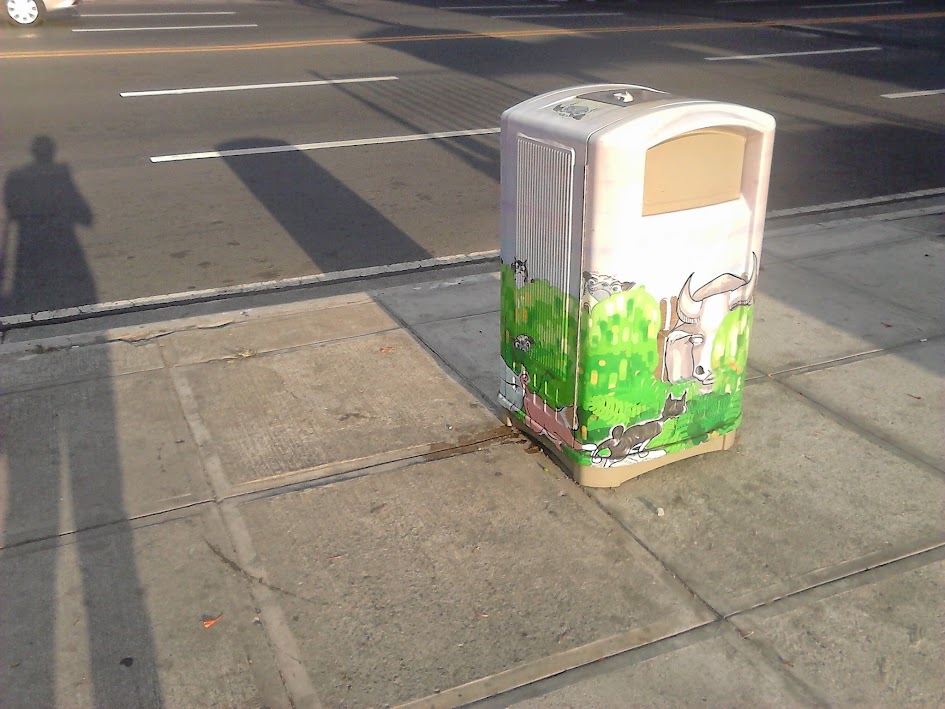 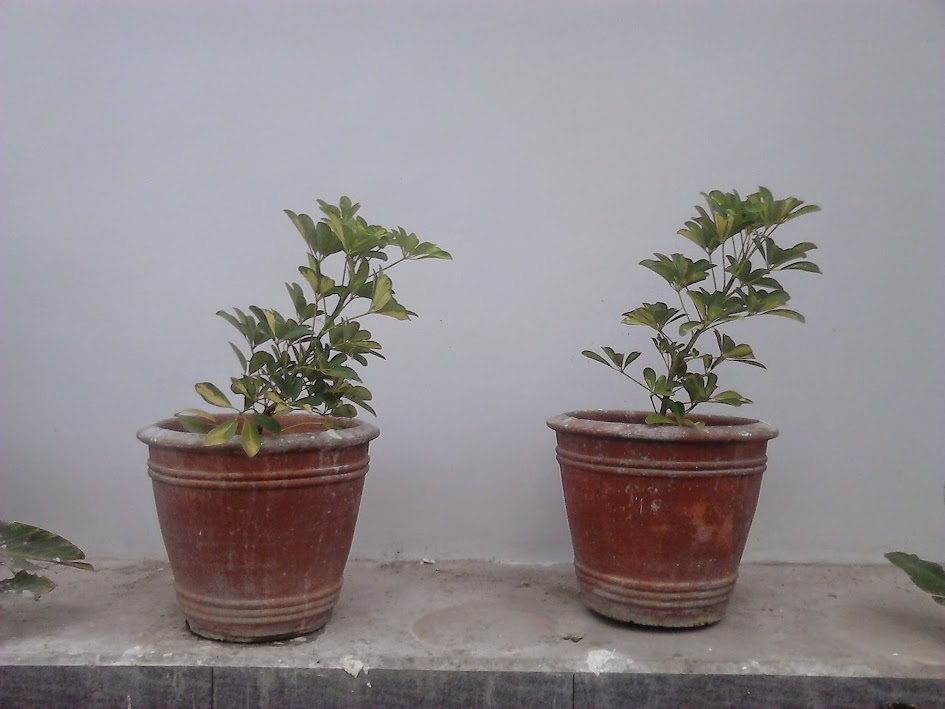 Battery life lasted for a whole day of constant use of texting, calling and some wifi usage. It would take 2 days on very minimal usage of texts and calls wtih wifi, bluetooth and data disabled.

I find the Xperia E1 to be an excellent performer in terms of fulfilling its basic functions. Aside from calls and messaging, it’s fast enough for running your social apps and playing your favorite music. It even has 3G connectivity and basically, it does its job well. Shutterbugs will be disappointed though due to the mediocre image quality. For the audiophiles, this will impress you

For the demanding Android user looking for a smaller alternative to their hulking smartphones, this won’t fit the bill as it will eventually get sluggish when you stuff it with apps. Not to mention those who decorate their home screens with widgets.

Click here for more on the specs and features of the Sony Xperia E1.