If you are aware of how the previous Galaxy Tabs look like, you”˜ll notice right away that the new ones are pretty good looking. Stemming from the Galaxy Note 3 design, it definitely adds a premium look to our tablets here. I particularly like the design upgrade of the 7.0 as the bezels are now thinner with the metallic accents and slight curves on the sides. The Galaxy Tab 4 10.1 may not have differed much in terms of its overall design but the metallic acents (same wih the Galaxy Tab 4 7.0) definitely made attention. Do note that the metallic accents are not really made of metal but plastic painted in a metallic finish. 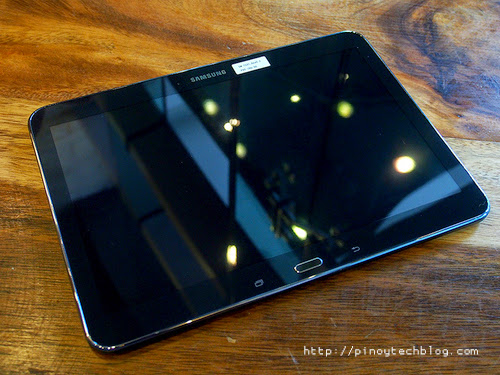 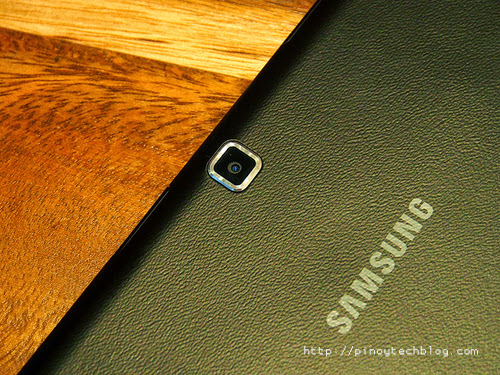 Looking at the back, they didn’t make use of the faux leather material but made it purely plastic with a leather-like texture to it instead. Nice try, Samsung.

The Galaxy Tab 4 7.0 and Galaxy Tab 4 10.1 tablets don’t differ from each other in terms of design but the button placements do have moved for ergonomic purposes. We can also expect the same with the 8.0. 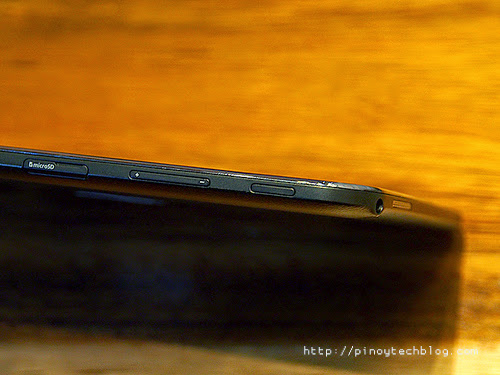 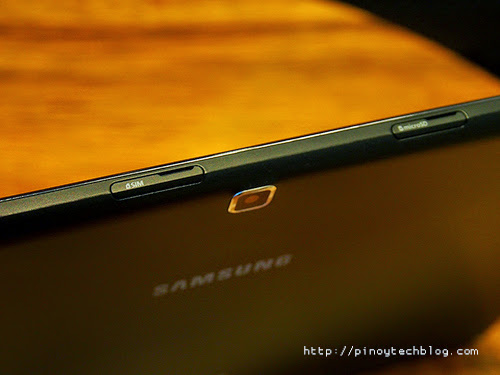 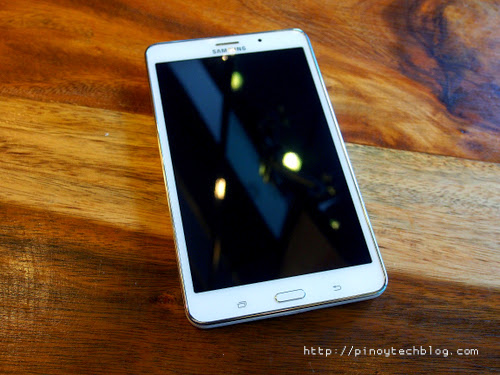 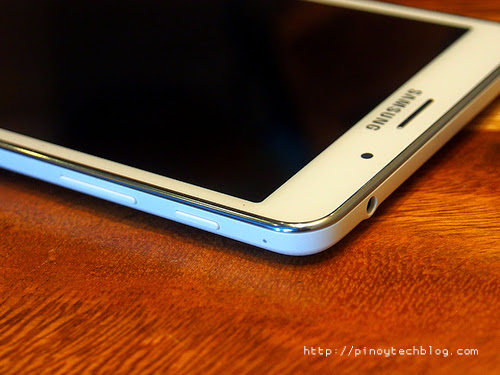 The home and capacitive touch buttons are placed below the screen. Underneath, you’ll find the micro-USB port and mic.

The Galaxy Tab 4 10.1 seems to be intended for landscape use so they’ve positioned the power and volume rocker buttons at the top left alongside the micro sim and micro SD card slots. 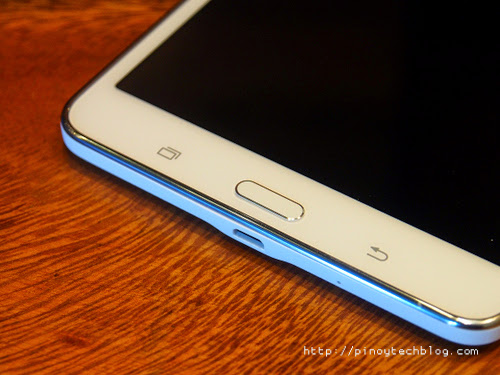 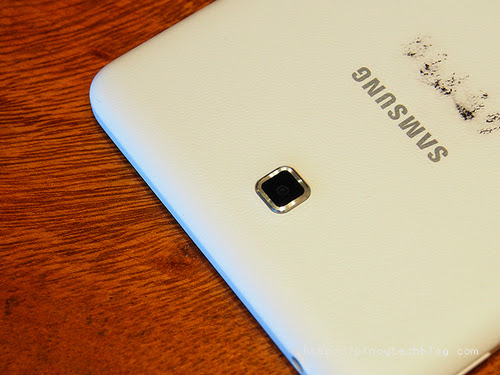 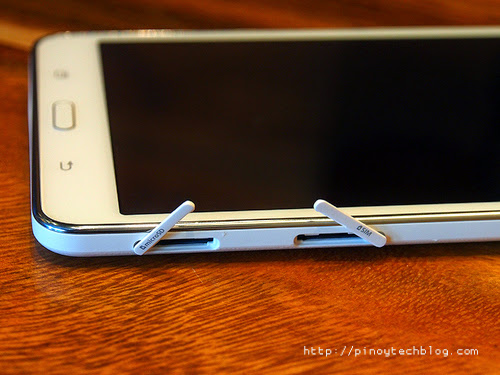 The home and capacitive touch buttons are placed below the screen with the micro-USB port and mic underneath.

Both tablets sport a 3.15MP camera at the back and a front-facing cam of 1.3MP. They don’t have LED flash but you can’t expect a high-spec camera from these tablets anyway.

Connectivity wise, these tablets came in Wifi and 4G/LTE variants. And yes, you can text or call as well.

Both tablets pack a 1.2 GHz Quad core processor with 1.5GB of RAM. By today’s standards, this is pretty okay although, I would’ve wanted more RAM. Let’s run through the performance of these tablets under the Antutu and Quadrant benchmarks.

Having tested these tablets, there were some occasional lags encountered when cycling through the home screens and changing from portrait to landscape mode or vice versa. It’s not the smoothest experience as what you can get from higher end models so it may come as a downer for those who extensively use Android. This would better be left for those who are into basic usage of social apps, browsing the internet, casual gaming or light office apps.

The tablets make use of a TFT capacitive touchscreen, both with 800×1280 resolutions, 216 ppi pixel density for the 7.0 and 149 ppi pixel density for the 10.1. The absence of a SAMOLED display quality doesn’t mean they’ll suck compared to the flagship models but they still pack some amount of oomph on the visuals with the graphics looking crisp and good contrast as well as the colors having the right amount of saturation.

It’s a pleasure watching movies on these tablets with their large screen estate, not to mention playing games. Sound quality for both though, is not the best there is …. The 7.0 tends to get muffled when placed on a flat surface since the speakers are located at the back. For the 10.1, the speakers are placed on the sides so you’ll get consistent sound output. All in all, these tablets will be able to please a lot of users with their multimedia capabilities.

It’s always good to have a camera on your tablet not just for taking pictures but for video calls as well. We can’t however, expect high quality stills or video from these tablets as usually the camera department is not what most tablet manufacturers focus on. And speaking of focusing, these don’t offer tap to focus capabilities so you’ll just be pointing and shoot all the way. Both tablets sport a 3.15MP camera at the back with no LED flash (no night photography for this one) and 1.3MP at the front. Let’s have a look at the samples below. 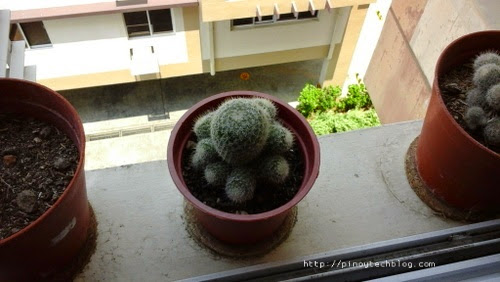 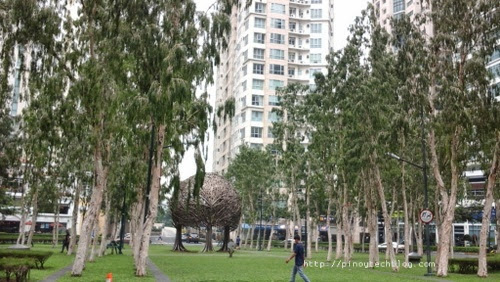 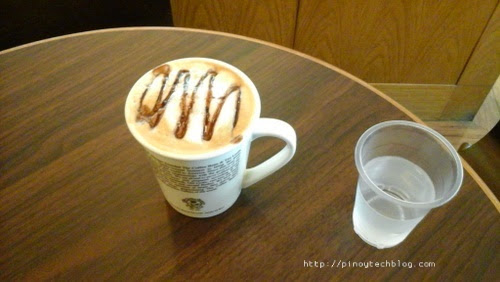 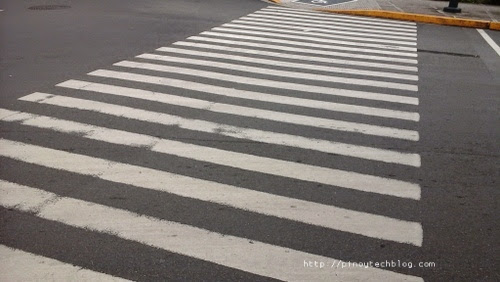 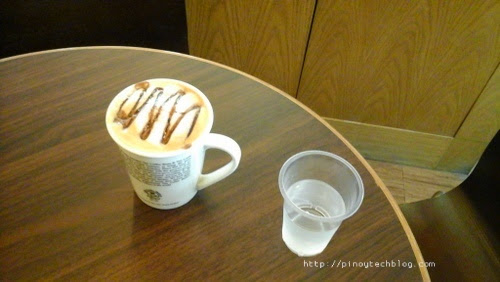 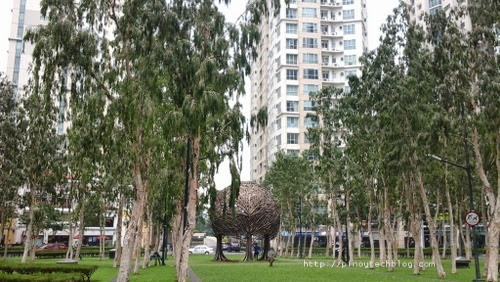 Looking at the pictures, the tabs were both consistent in delivering mediocre exposure quality with a good amount of sharpness. Colors were lacking some saturation though. All in all, it does the job especially on well lit places.

The Galaxy Tab 4  10.1 makes use of a 6800 mAh battery while the Galaxy Tab 4  7.0 has 4000 mAh. Having tested these tablets on the field, they seem to have lasted fairly long. You can enjoy browsing through the net, using your social apps, making texts and calls, occasional gaming and watching movies that will last you for a whole day with enough juice for you to fiddle with the tablet before plugging it in. 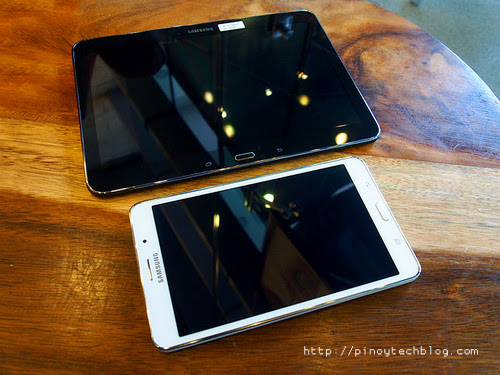 The Galaxy 4 tablets keep getting better both in performance and design. This will please most Android users looking for an affordable tablet that will perform their basic needs of social networking, mobile browsing, watching movies, playing light games, and not to mention the telephony features. Heavy Android users though, will suck the performance out of these tablets as mostly tend to install widgets and graphic-intensive games. If you are looking for a high-spec Galaxy tablet that will fill The Galaxy tab 4’s shortcomings, then you may look at the Galaxy tablet S 8.4 or the 10.5 which has significantly high performance, better graphics and better display. So if you think the Galaxy Tab 4 is pleasing enough for you, then you may head on to your nearest gadget store which retails the Galaxy Tab 4 7.0 for Php 11,990 and the Galaxy Tab 4  10.1 for Php 13,990 .